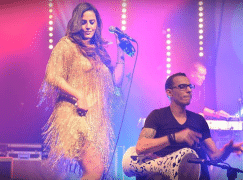 Nasreen Qadri will be on stage with Radiohead in Tel Aviv tonight. Born in Haifa and raised in Lydda, two towns with mixed Jewish-Arab populations, she has issued this rebuttal to the BDS campaign to block Radiohead’s visit:

I am a Muslim Arab woman. I am a singer. And this Wednesday, I will share the stage with Radiohead in their concert.

I was born in Haifa and grew up in Lod—two cities with a mix of Arab and Jewish communities, living side by side. It wasn’t always easy, but my personal experience has taught me that open dialogue is the only way to overcome our differences. Ever since I won a singing competition on Israeli TV, my music and my story have inspired many in Israel to open their minds and hearts to Arabic music and my people’s culture.

I have dedicated my life to music, and dedicated my music to breaking down borders and bringing people closer together. That is why this past year I did what no other Arab-Israeli has done before, and sang in Israel’s official Independence and Memorial Day ceremonies.

“Playing in a country isn’t the same as endorsing its government,” Yorke wrote in response to (Ken) Loach claims. However, I believe that it has everything to do with endorsing its people, and using music to engage with them. After all, if we don’t engage one another, and work together, we will never find peace between us.

This Wednesday, I will also perform alongside one of Israel’s most talented artists, Dudu Tassa—a Jewish singer—to bring a message of co-existence to every corner of the country. The two of us were fortunate enough to be invited by Thom Yorke to tour with Radiohead across the U.S. earlier this year.

« Leipzig fiddles around with its violas