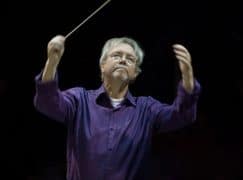 Mourning for a Dutch maestro, 75

Dutch musicians are reporting the death of Jan Stulen, a busy conductor, educator and television celebrity.

As permanent conductor for the public broadcasting stations in Hilversum, he made countless radio and television programmes. For many years he directed the television series “Jonge mensen op het concertpodium” (Young people in concert ) and “Una Voce Particolare”  (A distinct voice). Between 1986 and 1996 he was also permanent conductor for the WDR Rundfunk Orchester.

From 1989 to 2000 he was the director of the Deutsches Kammer Orchester Frankfurt am Main and of the Nederlands Promenade Orkest. Since 2003 he has been permanent conductor and artistic advisor of L’Orchestra Particolare (Netherlands). He has conducted orchestras and opera companies throughout Europe, Egypt, Korea, Vietnam and Thailand.