Is there a jinx on second cello concertos?

The second concerto for cello by Dmitri Shostakovich is the least ingratiating of the six he wrote, two for each major instrument. Opening with a gloomy, growling monologue, the solo part is matched in misery by the orchestra. The concerto was written in 1966 and first performed by Mstislav Rostropovich at a Moscow concert to mark the composer’s 60th birthday. Knowing that public pessimism was an offence in the Soviet Union, Shostakovich held nothing back….

And then there’s Martinu’s second concerto. 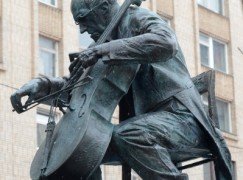