From the Strasbourg Philharmoic Orchestra:

The Orchestre Philharmonique de Strasbourg has just returned from a very successful tour in Korea under their music director Marko Letonja. For the trip from Frankfurt to Seoul, the Korean producer insisted that the musicians whose instruments were portable should take them in the cabin, and said that he had cleared everything with the airline. We were  understandably in light of peoples’ experiences with other airlines – somewhat nervous; but in the interests of goodwill and good relations with our producer we agreed.

Asiana Airlines (based in South Korea) was superb. All the instruments were boarded, they were properly stowed and no one had any problems whatever. The only glitch was the trombone cases, which were a little larger than the permissible dimensions. We found a solution for the outward trip, but for the return trip, where Asiana had been alerted in advance to the issue, they went to the extent of calling our trombonists to board first so that they could properly stow their instruments before everyone else boarded. The service was top notch, and I think the airline really deserves some recognition for their effort in light of what their competition seems to be doing. 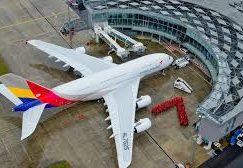