Death of a major French composer, 89

Le Monde reports the death yesterday of Pierre Henri, inventor of musique concrète and the most important French modernist after Pierre Boulez.

Working in 1950 with Pierre Schaeffer, Henri composed a Symphonie pour un homme seul, followed by several works of electronic abstraction. In 1958 he founded his own studio.

His works achieved wide currency through the ballets of Maurice Bejart and he stood for several decades at the centre of public debate on the shape of modern music. 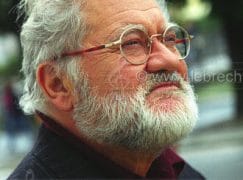