Jonas Kaufmann: Come watch us at the movies

The tenor put in a plug for watching big stars at live cinema relays in a BBC Today programme interview. 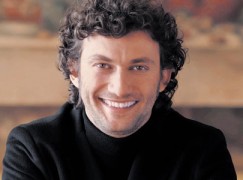