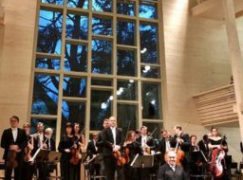 Anna Netrebko pulled out of Eugene Onegin at the Paris Opéra on May 31 ‘for personal reasons’.

We now know one of those reasons.

Netrebko was in St Petersburg, summoned by Valery Gergiev to the opening of the vanity concert hall he has built in the garden of his house in Repino. The hall has 100 seats and is intended for private use. The house, a former trade union rest home, is a gift to Gergiev from the Governor of St Petersburg.

Netrebko did not sing in the opening performance but she was seen in the audience by musicians, who have notified Slipped Disc. We are trying to obtain a photograph. UPDATE: Here’s the photo.

Here’s a report of the concert.

There were boos and catcalls in Paris when Netrebko’s withdrawal was announced. Her capable replacement was Elena Stikhina.

Top artists manager, 53, is felled by a stroke »