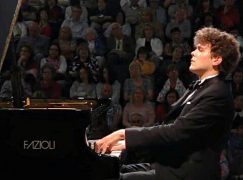 Rubinstein Competition is won by a Pole

In addition to the $40,000 first prize, he won five other supplementary awards.

In second place was the Romanian, Daniel Petrica Ciobanu.

Aged 21, Nehring is regarded as Poland’s finest young pianist. In the 2015 Chopin competition in Warsaw, he came sixth.

Peter Donohoe, one of the judges, says the jury vote was almost unanimous.

« An opera singer in gender transition