Just in: Swede to take over BBC Singers

The BBC have announced that David Hill will retire as chief conductor of BBC Singers in August, after 10 years.

His successor will be Sofi Jeannin, a Swede who has been music director of la Maîtrise de Radio France since 2008. 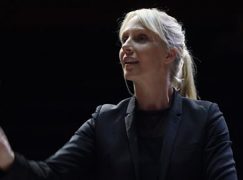 Jeannin, who gained an MMus in choral conducting at the Royal College of Music, has prepared choirs for Sir David Willcocks and Bernard Haitink and sang with London Voices and Terry Edwards before moving to France.