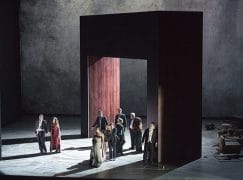 I saw the last performance of the Covent Garden run of The Exterminating Angel last night and was neither surprised nor disappointed.

Thomas Ades’s opera, based on a movie by Luis Bunuel, describes a disastrous dinner party (or possibly an opera) that no-one is able to leave, despite the doors being open at all times.

For two hours and a quarter, nothing much happens. Then the curtain falls.

This puts Ades’s work in the same current genre as Saariaho’s L’amour de loin, Birtwistle’s Last Supper, Benjamin’s Written on Skin and other masterpieces of the post-modern age.

Characters are put on stage, enveloped in an exquisite case of orchestral music. Two hours later, they are still there. The characters have not developed. Our emotions have not been aroused. No nails have been bitten. We don’t care who lives and who dies. Some social or philosophical comment is being made at the expense of the bourgeoisie and then we all applaud and go home, none the wiser nor the better for it.

The score that Ades has written for this opera is by far the richest thing he has done, with a huge swell of Straussian decadence in the third act and some overt debts to Messiaen. But the innate decadence of the plot defeats creative musical development and you sense the composer is running out of steam when he relies on an underpinning of ondes martenot and a percussionist with a playground whistle.

It was not painful to watch, nor taxing on the ears or brain. It was just static. Like Beckett with orchestra.

But Beckett made his point sixty years ago and theatre has moved on since then.

Main-stage opera is stuck in a rut.

It doesn’t have to be like that. Adams, Muhly, Mazzoli, Srnka and more have found ways to engage the emotions and the intellect without compromising originality or integrity.

The thing about an inert opera like The Exasperating Angel is that it’s going nowhere.

« Just in: Swede to take over BBC Singers

Prices are tumbling for music memorabilia »