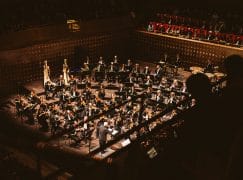 As of today, the Royal Flemish Philharmonic has changed its name to Antwerp Symphony Orchestra.

This new name emphasises the link to its host city and its new concert hall, and will help to strengthen the orchestra’s international profile, says the press release.

You weren’t aware it had an international profile? Maybe that was the problem.

Or maybe it’s because there’s no music director.

What was that name, again?

« … And Kurt Masur will have an Institut

One of these will be the next conducting star »