Despite rave reviews, Idomeneo is not selling at the Met

It’s a slightly better picture than the deserted landscape we posted last week. 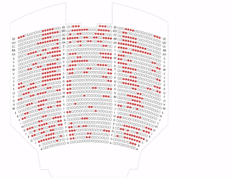 But this is the current state of sales for tomorrow (Monday) night for Idomeneo. The red spots are the seats still available – about one-third of the house.

No wonder they can afford to tell Jonas Kaufmann he’s not really needed.