What does it take to make Czechs smile?

This is the trailer for a new Rachmaninov recording by Khatia Buniatishvili, one of the more engaging soloists on the circuit.

The orchestra is the Czech Philharmonic. Their facial expressions are phlegmatic, if not glacial.

Do these players enjoy being on record? And on camera? 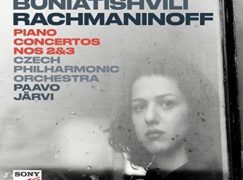