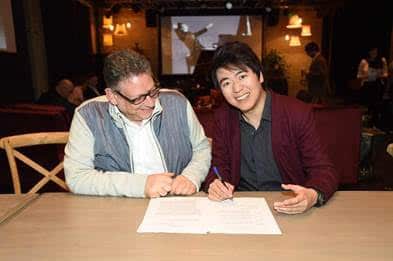 Rumours had been floating for a while that Lang Lang was unhappy at Sony Classical.

Tonight, they have been confirmed.

The Chinese pianist has signed a contract with Universal president Sir Lucian Grainge to return to his first label, Deutsche Grammophon.

Lang Lang says: ‘When I met Lucian and his team I was amazed by their open-mindedness and passion for innovation. This is exactly the spirit we need to promote classical music in the 21st century. My dream has always been to share music with as many people as possible, and I can’t wait to start working with the Universal teams around the world.’

This a shock to Sony and a blow to its chief Bogdan Roscic, himself on borrowed time until he becomes head of the Vienna Opera in 2020.