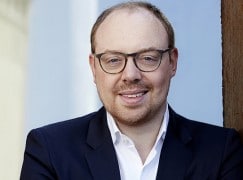 We get to make music with the boss of DG

I have been savouring my final moments of vacation before quartet resumes this week. Both daughters are home with us (our youngest had her 5th birthday this week) and I have spent much time preparing for the heavy musical workload coming my way in the early months of 2017. The luxury of a quartet schedule allows for time off between frenetic work cycles – a time to connect deeply with family and to have long, uninterrupted personal practice sessions. As Jason begins work, our house takes on a new order, with a nanny schedule and a house cleaner. We have connected with friends, and had a magical evening at a musical soirée – it felt almost historical in a way – a true European living room chamber music evening.

The first snow has graced Berlin this week, and as Jason and I set off, early evening, to the home of a friend, the trees on Kurfürstendamm, still decked with millions of tiny white lights, glistened in the dark winter night. We passed the scene of the recent terrorist attack, boarded up, but bustling with people, a large memorial area covered with candles and flowers lines the sidewalk. Life continues quickly despite tragedy.

We buzzed up to Clemens’s apartment – he is the host of the musical soirée.  As the head of Deutsche Grammophon, Clemens is an unusual person. A passionate performer (clarinet), active concert-goer, and keen businessman, he also has a past resume which includes a law degree and work in the tech industry. When we met this summer, his easygoing and casual nature belied his high-powered musical career.

Jason and I were among the first to arrive – Franziska Hölscher was already there, wrestling with the computer printer, which was furiously spitting out potential music for tonight’s concert (which was to begin in 90 minutes time).  Jason and I plopped down our donations towards the reception food as other musicians arrived – Andreas Willwohl, Kristina Kerscher, Markus Groh, and Kian Soltani.

We began to move the furniture, piano, set up stands and chairs, and lined up potential repertoire on the couch. It soon became apparent that we had no complete sets of music except a Schumann piano trio, so as people set tempi  for that, someone ran to get more paper for the already overtaxed printer as it started to fill out the missing parts to Tchaikovsky Souvenir de Florence and the Schumann Piano Quintet. The Piazzola Seasons were found, and with the addition of a Prokofiev quintet, and Beethoven Gassenhauer, our program was complete.

The doorbell began to ring, and the musicians all instinctively rotated into the rolls of greeters, dish washers, bread cutters and cheese-plate preparers, and fire-brigade chair retrievers from the cellar.  As the tables began to fill with bottles of wine and plates of food, the musicians would find each other in the kitchen – someone had begun to rip the baguette and we passed it amongst ourselves, slicing Camembert and stealing grapes from the tray.

And we were off – we gathered by the piano, in the living room with the wall of books reaching to the ceiling, audience piled on every possible piece of furniture, and the French doors open to the other rooms, and someone asked about the order. I quickly grabbed a magazine from the bedside table and jotted down a program on the back page. Before each piece, a counting of the tempo and checking repeats – and a lovely off-the-cuff introduction by one member or the other. As the audience stomped enthusiastically (their exuberance bolstered no doubt by their filled wine glasses), Clemens pulled out an encore – the slow movement of the Mozart Clarinet Quintet. What a wonderful way to end the evening.

As Jason and I left the party in the wee hours of the morning, the sidewalk dusted with fresh snow, and me with my new German driver’s license in hand, we look forward to 2017 and all the magic it will bring.

« How the Dude lives

How Kiri turned a football player into an opera tenor »