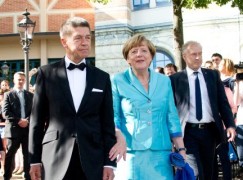 The outgoing Berlin Philharmonic conductor has been sharing some of his German experiences with journalists of the Süddeutsche Zeitung Magazin (not online).

Sir Simon says he quickly got to like the Chancellor, who loves coming to concerts.  But he was even more impressed by her husband, Professor Joachim Sauer, who can speak with authority on serialism and modern music and was clearly th one who bought tickets to the more adventurous concerts.

The Chancellor came to dinner at his place in Berlin. The conductor cooked lamb with aubergine.

Wonder what’s on his menu for Theresa May.

« National Youth Orchestra is given half a million dollars

Denmark: Our arts are the envy of the world. So let’s cut the budget. »