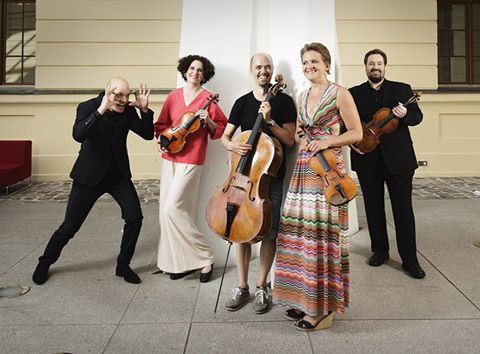 ‘I’m not allowed to talk about my stolen violin’

This week’s episode from the diary of Anthea Kreston, American violinist in the Berlin-based Artemis Quartet:

When my violin was stolen on the train last week, I had the second experience with what I will now call the “dragon dance”.  This is when, in an extremely time-sensitive, intense and complex situation, each member of the Artemis Quartet immediately assumes a super-power persona and the three (I don’t think I am yet in full-power mode) of them begin what seems to be a intricate and non-choreographed ballet. The first time I experienced this was when Ecki’s cello was denied entrance to a flight. One member stayed at the counter to work on the problem, one rushed ahead to hold the gate, and one worked with our secretary and travel person to find a solution. Speed, cunning, creativity, strength and charm were the powers used. No discussions, just three people swirling off to solve this problem, all avenues somehow seen at once and converging to a positive outcome.

The second time this happened was the moment when I realized that my violin had been stolen from the fast train from Berlin to Freiburg. You know that moment in any movie with a dinosaur, when a dinosaur first locks eyes with the audience, and we all realize for the first time, “this creature is vastly superior to me in every way and I am about to be crushed”?  That is how it feels. In a good way. I am an auxiliary dinosaur member. Or – to put it in a more contemporary setting – the moment when Rhaegal and Viserion emerge from the dungeons of Mereen to join Drogon to take back Meereen from the Masters. Oh gosh, can I be Daenerys?  Not yet. Not yet. But I am working on it!

I am not allowed to talk about my stolen violin at the moment – there is an investigation underway and mum’s the word until I hear otherwise. But I can tell you a bit about the moments immediately following the disappearance. After my seat-partner said someone had taken the violin and headed to the back of the train, I went to find the rest of my quartet, who were spaced out throughout the train.  The first one I found was Gregor, the violist. We were about 20 minutes from the next stop. He grabbed his suitcase and bag, and I put his viola on my back. As I swept forward to find Eckart (the cellist), Gregor went backwards to the conductor to report the theft and to have police notified at the most recent stop. Next Eckart was found, and he took his things to go gather information from witnesses before he and I were to get off at the next stop to meet with police. Vineta (violinist) quickly gathered photos of my violin and put an SOS on social media. I contacted Norman at Slipped Disc. As Eckart and I left the train, witness information in hand, Gregor was sweeping bathrooms for any evidence of a discarded case or any clues. Vineta was on the phone with our secretary, publicist and manager to secure a borrowed violin for the concert which was to begin in short order. Eckart and I rushed to the police to make a full statement, and were able to get a train in just enough time to arrive at the hall, where 4 violinists were waiting, cases in hand, to lend me their precious instruments for the concert. No one broke a sweat, no one raised a voice, not one negative vibe was exuded. I tried each violin for a minute, quickly chose one, and we went to change for the concert, now 27 minutes until curtain. I had this time to get used to the violin and get changed.

I noticed that this violin had a sweet tone, and the quartet said they were used to a louder and clearer tone from me. It was a beautiful violin for sure – but when I tried the opening of the second movement of Beethoven Op 59 #1, all that came out was a series of small squeaks – like a little happy mouse. I was also terribly out of tune. I decided, after getting changed, to use my last precious minutes to play scales in 4ths, 5ths, and octaves, and to play Meditation from Thais for bow control.

As we headed out to stage, we looked at each other and shared a moment of resolve. The violin was shaky to start, but quickly we gained confidence together. I knew that I was going to have to adjust (we all would) on the fly – so I decided to enjoy the experience – to allow my mind and body to find its way, not thinking too much, but just trusting and forgiving. After the first piece, the quartet back stage gave me a big thumbs-up – all is well. During the Shostakovich I began to recognize the strong and weak parts of this instrument, and shifted my fingerings and bowings to suit – for a loud g string solo I decided to take it to the d string to avoid wolfs that I had found. A soft sad solo that I normally begin high up on the A string I took with backwards bowings – the touch at the frog was still eluding my complete control.

During intermission I checked my phone – over 70,000 instrument shops had been notified in the States, a mass-email had been sent to all Violinists.com members, Norman had put up a notice on Slipped Disc, and we were soon to have over 100,000 views on Facebook. A country-wide notice for German violin shops had been sent by Andreas Kägi in Berlin. Things were moving quickly.

But – now on to Beethoven. For me, Beethoven has always required the utmost in concentration and perfection from me – there are unlimited numbers of things I must do and react to – the control and musical demands are relentless. This was no time to let my mind wander – I must be at the top of my game. The opening solo in the second movement (Op. 59 #1) is one of those places which seem so simple – so easy in the practice room.  Just 4 bars, pianissimo, first position. But it can come out sounding as if someone just threw some marbles in the washing machine and hit “start”.  And also – everyone has the same solo one after the other, so comparison is quick and obvious. This is the solo that I completely bombed in the quick dress rehearsal. But – it was totally fine in concert – I had a little supportive eye contact with Vineta – all is well.  Then – the solo note at the beginning of the devastatingly tender slow movement. A single c, piano, played by the second violin  before the rest of the quartet enters – a feeling of suspension, desolation, timelessness and urgency – both a hollow sound and a sound which gives birth to a tender sadness – this is what my personal goals are for this moment. But, as string players know – a changing of a bow can be more difficult that the changing of an instrument. I closed my eyes and it came out – different from my Becker, but it came.

After the concert, I met the owner of the instrument. We talked as I headed to the CD signing area. We had not had time to speak before the concert – I did not know what I was playing. She told me – an Amati – with gut strings!  So – I was playing on an an instrument that was 300 years old, and on gut strings for the first time in my life. Gut strings – the way strings were made before metal strings were invented – have a warm sound but are softer and go out of tune very quickly. I did notice that I had to adjust a lot in the concert – after the first several minutes, I could not play open strings anymore, and used my fingers to dampen and adjust as I went. As a second violinist, my duty is often to supply the middle of chords – often on double stops. My fifths required minuscule acrobatics during this concert, but I didn’t want to be tuning between each movement so I just adjusted. The owner of the violin said – “well – that is certainly the first time Shostakovich has been played on this violin – I didn’t know it was possible!”.  I am glad, in retrospect, that I didn’t know what I was playing – better to just trust your instincts and jump in.

So – maybe some day I can talk about the next day – but for now I cannot speak about it. I had a flight booked back home, but I needed to go to that train station – Mannheim – where the violin disappeared.  I stayed awake and make posters for taping up – American style. In the morning, Gregor called the Mannheim police and told them I wanted to come, talk, look, tape up posters, see video footage. They were nice but firm – it is illegal to tape up posters and to see the footage. No point in coming.  The quartet said – don’t go!  There is no point. But – I did. I had to. I wanted to meet the police, make a personal connection, walk around the train station. It was quite a day – maybe I can talk about it next week.

Until then – an amazing thing did happen. By the time I got home late the next night, a donor had come forward. I have, on indefinite loan, a beautiful Italian violin from the 1700’s and a gorgeous bow.  It happened. I don’t know how, but it did.