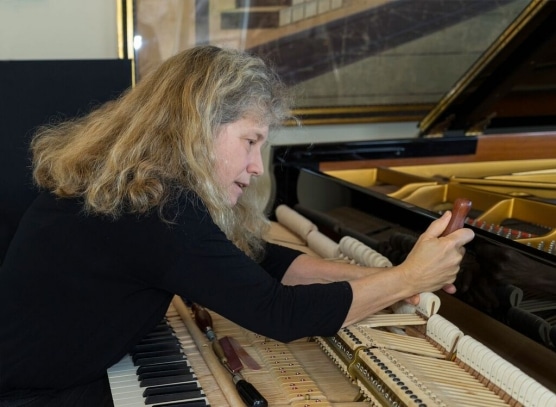 Why can’t a woman be a piano tuner?

Veteran foreign correspondent Michael Johnson has been talking to a rare entrant in an all-male occupation. Barbara Renner looks after the pianos at Tanglewood. ‘The wives don’t like it,’ she says.

Tanglewood chief piano technician Barbara Renner once won a $50 bet by proving to a male tuner that she could manipulate the nine-foot Steinway Model D as well as any man. And she has gone on to thrive in this man’s world of piano tuning, never looking back. Equipped with a refined and well-trained ear, she is now in great demand, tuning pianos all over the East Coast of the U.S. with great classical and jazz pianists.

It wasn’t the first time her physical fitness for the male-dominated job had been challenged. While in training,her instructor asked each student to remove the action from an old reproducer (player) Steinway grand that had very long keys and carry it across the room and back. “He wanted to make sure we were physically capable of the task.” She passed the test and was on her way.

Women in the tuning world, still a small minority, have been forced to face down the men.  And the odds are long.

« How to unwire the demons of stage fright