Bavarian Radio is 100 million Euros in the red, orchs under threat

State auditors have exposed a huge deficit at BR, amounting to 100m Euros over the years 2010-14.

The BR symphony orchestra, radio orchestra and chorus amount to just over 25 percent of the network’s costs.

The record label BR-Klassik has clocked up a 491,000 Euros loss.

There will be a reckoning to come. 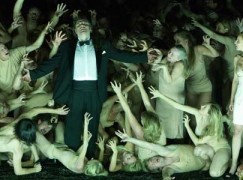