Anna Netrebko is working on her German

The Russian-Austrian soprano tells Das Opernglas, out today, that she has set aside the whole of April to master the German language, in readiness for her Wagner debut as Lohengrin’s Elsa in May.

Christian Thielemann will conduct the production in Dresden. He’ll make sure she speaks good German. 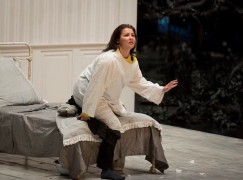