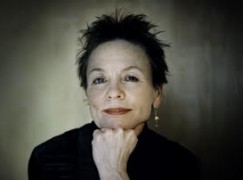 Laurie Anderson gets a UK festival

The scintillating American musicians has been named Guest Director of the Brighton Festival in its 50th year.

Brighton Festival is delighted to announce that the Guest Director for 2016 is the pioneering artist and musician Laurie Anderson. Anderson takes the helm in a milestone year for Brighton Festival as in 2016 it marks its 50th year, celebrates its unique, energetic and creative city and reflects on the nature of home.

Renowned for her inventive use of technology – from her 1981 hit O Superman to her appointment as NASA’s first artist-in-residence –Laurie Anderson is one of America’s most daring creative pioneers. Her eclectic, multidisciplinary career has spanned the worlds of art, theatre and experimental music and has seen her create works as a writer, director, visual artist and vocalist. Most recently Anderson has garnered acclaim for her first feature film in almost 30 years – Heart of a Dog – which reflects on the deaths of her husband Lou Reed, her mother, her beloved dog, and such diverse subjects as family memories, surveillance and Buddhist teachings.

A long-time supporter of Brighton Festival, Anderson is well-known and well-loved by the city following successful appearances such asDelusion (BF2011) and All the Animals (BF2015). An inspiration to audiences and artists alike, she has been described by Brighton Festival 2015 Guest Director Ali Smith as: “the performance artist, singer, musician, artist of our lifetime I think – a great, great figure of liberty and liberation of the arts”.

« Inside the world’s newest opera house