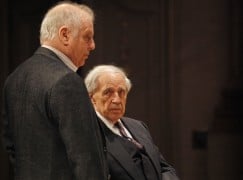 Daniel Barenboim:
Pierre Boulez and I first met in Berlin in 1964 and there have been few fellow musicians with whom I have developed such a close and important relationship in the 52 years that followed – even though we always stuck to the formal “vous” when speaking to each other, a rarity in our rather informal world, but from my side, certainly, an expression of my deepest respect and admiration.

“Creation exists only in the unforeseen made necessary”, Pierre Boulez once wrote. With this belief as his paradigm, Pierre Boulez has radically changed music itself as well as its reception in society. He always knew exactly when he had to be radical because it was a necessary requirement for music and society to develop. He was never dogmatic, however, but always retained his ability to develop himself further. His development was based on a deep knowledge of and respect for the past. A true man of the future must know the past, and for me, Pierre Boulez will always remain an exemplary man of the future.

Matthias Pintscher, composer:
Sleepless and completely overwhelmed by the loss of Pierre Boulez…all the countless memories are flooding my brain, all those beautiful moments of sharing music, thoughts and an unconditional and generous friendship and his loyal mentorship….I miss him so much.

He leaves a huge void among all of us but also imposes the duty on all of us to continue to walk on the path he has laid out for us: keeping moving forward, never standing still, keeping the mind fresh, bold and inspired, always staying curious and loving and share music because it is in between humans and take it where words end…
I would not be a musician without him
no one has inspired and encouraged me more than him
and I will always miss his smile

Franklin Cohen, principal clarinet of the Cleveland Orchestra:
The wonder of hearing the sound of an orchestra change so immediately in his hands was a marvel! I can remember countless concerts where the Cleveland Orchestra would respond to his confident and always warm gestures of flexibility, rhythm and pristine clarity.
It was my honor to be asked by Mr. Boulez to record the Premiere Rhapsody of Debussy with the Cleveland Orchestra and Deutsche Grammophon. This was to be sure one of the highlights of my musical life to date.  The disc was awarded two Grammy Awards and is only a very small glimpse into the magical sound world that was the trade mark of Maestro Boulez.

Natalia Pschenitschnikova, composer
I was the first who played Boulez Flute Sonatina in USSR. I was student in Moscow Conservatory and was almost thrown out because of that. I loved this music from the first moment. R.i.p Pierre Boulez. Thank You for everything!

Frederic Chaslin, conductor:
Pierre Boulez told me, when I worked with him, that the Jerusalem Symphony, where I now serve as Music Director, was one of the first orchestras that he conducted and actually returned there in 1967 for 2 more concerts. We found the programs and reviews in the archives for those 2 concerts:

The concerts took place in August 10 in Caesarea Amphitheater and August 12 in Binyanei Ha’ooma in Jerusalem.
The program on both concerts was:
Schoenberg Chamber Symphony No.1 Op. 9
Schumann Symphony No. 2 in C Major, Op. 61
Stravinsky Chant du Rossignol, Symphonic Poem

Riccardo Muti:
As both an admirer and friend of the Maestro, I am deeply grateful for his contributions, as composer, conductor and educator, to the Chicago Symphony Orchestra, with which he had a collaboration of nearly 50 years, and served so brilliantly as its principal guest conductor and conductor emeritus.

Lennox Mackenzie, violinist and LSO chairman:
When Sir Simon Rattle announced the news of Pierre Boulez’s death at rehearsal today a palpable aura of sadness and quiet ensued. Maestro Boulez was enormously respected and loved by everyone in the LSO…. His visits were always warmly anticipated by one and all. Never one to use a baton, his minimal style of conducting brought great clarity and exhibited to the performers that it was the music that was important. The attention to detail allied to his deep, intellectual understanding of these masterpieces always brought revelations to his musicians in rehearsal. His hearing ability was legendary, able to pick out a slight intonational lapse perhaps from one musician, when a hundred were playing. Working with him was always compelling and intense.

« Laurie Anderson gets a UK festival