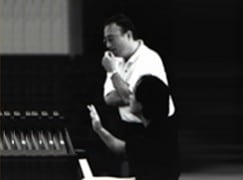 After the resignation of Myung Whun Chung as music director, under a hate campaign from a sacked CEO, more key personnel are leaving the orchestra before things turn really nasty.

A concertmaster, whom we have been asked not to name, has left the country without signing his contract.

And the orchestra’s artistic advisor, Michael Fine, has submitted his resignation. Michael, a former head of Deutsche Grammophon, secured the Philharmonic a 10-album contract and world tours with Maestro Chung. He was passionately committed to its success and held its musicians in great affection and respect.

All history now. The SPO is losing credit and people day by day.

Inside the world’s newest opera house »