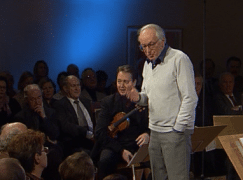 In his prime, he founded the formidable La Salle Quartet which played modern stuff other ensembles wouldn’t touch. Named after a street in Manhattan where the players lived as students, the quartet was Cincinnati based and world renowned. It premiered works by Lutoslawski and Ligeti and brought back from oblivion four major foursomes by Alexander Zemlinsky.

After the group broke up in 1987, Levin continued teaching in Switzerland. But the onset of dementia reduced him to silence. He lives now in a retirement community in Chicago. Amazingly, the only thing that can persuade him to speak is the opportunity to coach musicians.

Read a compelling piece about Walter and his devoted wife Evi in the Chicago Sun-Times here.