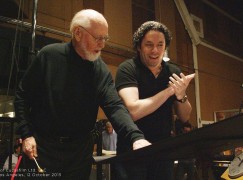 For Han Solo and Princess Leia’s theme, Tchaikovsky sets the tone… Tchaikovsky’s Violin Concerto in D is where Williams found his melody for Han and Leia’s theme. The two are almost identical; the Tchaikovsky is faster, the Williams more sentimental….

Frederic Chopin’s Piano Sonata No. 2, nicknamed the Funeral March, is where Williams found Vader’s melody. To give the Imperial Death March some momentum, Williams turned to a different work about outer space, Gustav Holst’s “The Planets,” specifically “Mars, the Bringer of War.” The pulsating, repeating rhythms, the melody played by the low brass, the super ominous feeling it evokes — Vader also brings war everywhere he goes. “Mars” was a good choice.

Read more – and listen to the comparisons – here.

with Gustavo Dudamel, laying down soundtrack

« The artist with most hits on Slipped Disc?