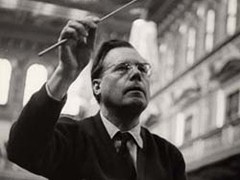 Karl Böhm is named a Nazi in Salzburg

The Salzburg Festival board has decided to affix a plaque to the Karl Böhm Saal, specifying that the conductor, while musically gifted, was an enthusiastic Nazi who used the inhumanities of the Hitler regime to advance his career. The plaque will be engraved in German and English.

There is nothing new in that statement. Böhm was an outright Nazi who in 1938 told the Vienna Philharmonc that anyone who did not vote for Hitler’s Anschluss could not be considered a proper German.

However, the decision to out Böhm as a virulent Nazi leaves Salzburg with a major headache.

Will local hero Herbert von Karajan, who profited no less than Böhm, receive a plaque of his own?