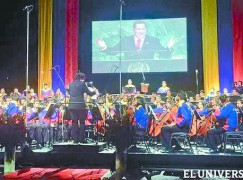 El Sistema ‘is forcing musicians’ to vote for ruling party

We are hearing directly and indirectly from musicians in Venezuela that they are being press-ganged into voting for the Chavista government next Sunday. The director of one of the Sistema nucleos writes:

‘They sent at 2:00 pm all the nucleos directors on a national level a form of 1×10 and told us we had one hour to fill it out. We had to write on it 10 names and identity numbers of people that we committed to take to the voting centers to vote for the Chavista party. I had to make my personnel fill them out as well. But the form also came with a couple of calls from functionaries on the 18th floor pressuring us saying it was a direct order from Eduardo Mendez and Andres Gonzalez, who are now the two managers who have the power as the Fundamusical Executive Director and Manager of Development.

‘I answered, ”Well, tell your boss that I will wait for the call to force me personally to do it. Now they are going to force us to do what they force all the other public employees to do. The next thing will be to force us to go to the marches.” Our musicians today are victims of the politicization of El Sistema.’

Several musicians have independently corroborated that El Sistema officials are working for the Chavista machine. There has been no statement from the El Sistema founder, José Antonio Abreu.

« Atlanta Symphony musicians are robbed at gunpoint after rehearsal