Knoxville Opera has put out a notice for auditions on social media.

Under the cautionary heading ‘Restrictions’, it announces: ‘Knoxville Opera will cast age appropriate, attractive artists in these roles’. 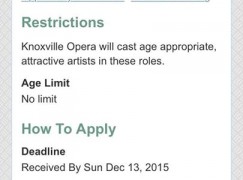 Here’s another howler from Knoxville Opera’s Fb page: ‘Just wanted to make something clear. Our annual gala event this Saturday is “The Prima Donna Ball” not “The Pre-Madonna Ball”. This is important.’

Gets better and better.