The violinist Philippe Quint took his video out for a stroll in Manhattan. The results of his impromptu survey are sometimes surprising, even shocking. Watch. Think about it. 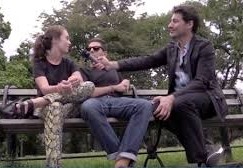