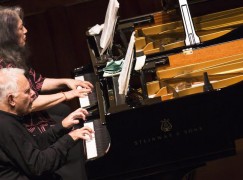 Martha turns out for her ex

It was the 75th birthday concert of Stephen Kovacevich. Who better to play four-hand with him than former wife and mother of his child, Martha Argerich. Erica Worth, Editor of Pianist magazine, tells us it was a once-in-a-lifetime event.

Even if these two giants of the piano are such very different pianists, it was apparent from the outset that they go back a long way (Kovacevich tells Jessica Duchen in the October/November issue of Pianist that they are indeed soulmates – and it shows). It was the way they walked on to the stage smiling at each other, the way they waited for each other to begin, the way they gave each other knowing looks throughout, how they knew to make the two-piano writing merge as one, and then the way that they laughed and chatted when exiting the stage. This was intimate music-making.

I noticed that Argerich used the services of pianist and long time friend Alberto Portugheis to turn her pages (I didn’t recognise Kovacevich’s page turner). It seems that even the page-turners were part of this very personal concert (and how important a good page-turner is, too, I may add).

It was in the Symphonic Dances that they shone the brightest. The opening was fiery, earthy and rhythmic – each pianist producing a myriad of colour from the perfectly in-tune Steinway pianos. This was Kovacevich’s first performance of the work (Argerich having played it countless times) and it was great to see him let himself go.

They were having fun! The Andante was tender and heartbreaking and the final Allegro vivace a sheer roller coaster of excitement (not to mention quick!). 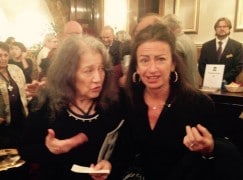 After the interval – during which I manage to have a two-minute chat with Argerich while she was searching for her missing espresso (‘Stephen’s having tea though’ she told me) – Kovacevich came on to the stage to perform a work that has always been close to his heart, the Schubert D960 Sonata. There might have been the odd fluff here and there, but who really cares when we know we are in the presence of a great artist. Kovacevich gave us a real sense of the overall structure, he let the music speak without gushing or pulling around with tempos (as so many tend to do with this work) – and because of this subtle handing of Schubert’s late masterpiece, the poignancy was even more acute.

There was just one encore: Kovacevich called out into the audience for violinist Alina Ibragimova to join him on the stage – and they played a serene but heartfelt Vocalise.