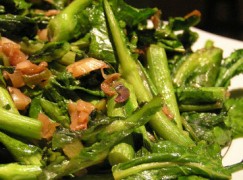 An annual leaf-vegetable festival in the Galician town of As Pontes has acquired a very different character after Google Translate renamed it ‘the clitoris festival’.

The particular vegetable, a local delicacy, is known as grelo. Google turned Feria do grelo into Feria Clítoris.

‘The clitoris is one of the typical products of Galician cuisine,’ proclaims the festival’s website, according to local media.

‘Since 1981, the festival has made the clitoris one of the star products of the local gastronomy.’

Let this be a warning to us all…

« Martha turns out for her ex