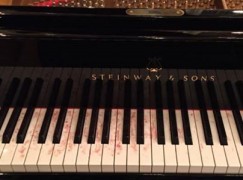 Blood on the keyboard after LSO Bartok concert

The London Symphony Orchestra has posted this photo of the Vienna Konzerthaus piano.

It was taken last night by first violinist Rhys Watkins during the concert interval, after Yefim Bronfman had performed the third Bartók concerto.

The soloist gave his life’s blood…

UPDATE: Bronfman told LSO violinist Maxine Kwok-Adams that there was also blood on the floor.

2nd UPDATE from the LSO: Mr Bronfman cut his finger and received treatment earlier in the day. He insisted on going ahead with his performance rather than disappoint the audience. During the concerto his wound reopened but, undaunted, he gave a superb performance and also a sublime encore.