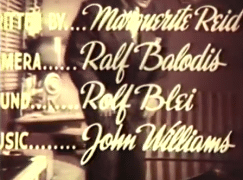 Apparently so, according to a Canadian producer, who has unearthed a 1950s short film promoting the attractions of Newfoundland…

From a contemporary report:

In March 1952 [John Williams] was reassigned to the 596th AF Band, Pepperrell Air Force Base, St. John’s, Newfoundland. During his stay at Pepperrell he was able to put his training to use with special arrangements penned for the 596th Dance band and Newfoundland folk songs re-arranged for the concert band sparking the many appearances of the Pepperrell Band. His greatest accomplishment during this period was the composing, arranging, directing and playing of a 22 minute film background score for a Newfoundland travelogue entitled “You Are Welcome.” The success of this accomplishment was reflected in the film being selected as “one of the outstanding travelogues for 1954” during a premier showing in New York City.

« Blood on the keyboard after LSO Bartok concert