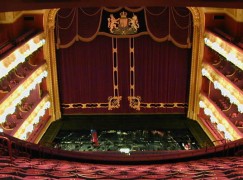 Installation magazine reports that the Royal Opera House has ‘upgraded its sound system’ with ‘eight KP102s mounted each side of the proscenium arch.’

Does that mean singing voices will be subtly boosted? Here’s the none-too-categorical answer from ROH head of sound Steve Zissler: ‘As well as being an opera house, we also host commercial events,” said Zissler. “And for us, the K-array is a system that covers at least 90/95% of what we want to do.

‘When you walk into the auditorium, you’ve got the grandiose gold proscenium, rich red plush seats and you’re not expecting to see a loudspeaker hanging above your head. That’s the key to it for us; it’s all about people coming into the auditorium and not seeing a loudspeaker, or not having a sense of the sound being reinforced. For a commercial event, it’s fair enough, but generally, if we’re doing some of the more contemporary operas or ballets which may have electronic instruments as part of the score, you just want that sense of the sound being lifted, but not the sense of it coming from that loudspeaker over there.’

Hmmm. Must check this out.

How to become a fully qualified pop singer »