The Hollywood actor is in Israel for the Jerusalem premiere and general release of her debut film as director. In A Tale of Love and Darkness she brings to the screen the autobiography of Israeli writer Amos Oz.

Natalie, who also co-wrote the script, plays the role of Oz’s mother, Fania. Portman, who was raised by Hebrew-speaking parents in the US, says the book reflects much of her own family history. 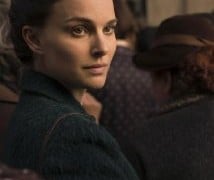 The music is by Nicholas Britell. The film has been shown at Cannes and Toronto film festivals.