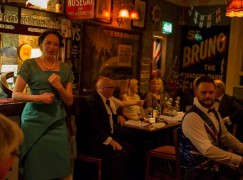 Who do I have to tweet to get a review round here?

Patricia Hammond, a London-based mezzo from Canada, has put heart and soul into making an authentic recording of songs from both sides in the First World War. But can she get a review? Editors complain that the music does not fall into any recognised genre and refuse to assign it. Absurd but true.

What does Patricia have to do to get a flash of attention? 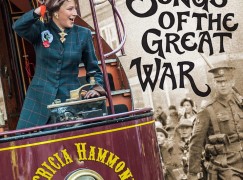 I have released an album of songs of the First World War.

It presents the sound-world of the 1910s, painstakingly reconstructed with original instruments and instrumentations. It was funded by Ian Rosenblatt, so my colleague Matt Redman could take all the time he needed to transcribe from sources, train musicians unused to this particular style, and expand the original sheet music outward in arrangements that would have been at home in the West End salons of the second decade of the 20th century. My own research started when I was eight, listening to 78rpm records in my parents’ basement.

We have presented music from the pacifists and the Germans as well as some neglected gems that have, as far as I know, never been recorded. We performed it in a wooden studio with very little separation, gathered together as musicians would have gathered around an Edwardian recording horn.

And can we get a review, or a mention in a newspaper?

Aside from works by Eric Coates, Cecil Forsyth and Herbert Ivey, all of whom are considered classical, we use such authentic instruments as a steel stringed guitar (a Gibson L-4 from 1911, especially designed to be heard without electronic amplification), an accordion and saxophone, not to mention a violin, cello, harp and flute.

The BBC Concert Orchestra often includes a guitar and drums in their lineup. Weill’s Mahagonny rejoices in banjo, steel guitar and woodblock, and Golden Age Broadway shows are now proudly presented by the likes of the ENO…to protest at their being included in a classical session is ridiculous.

But somehow we have fallen between two genres. 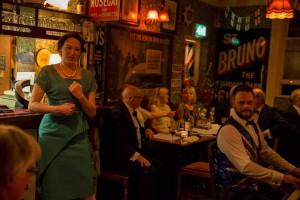 The 1910s was a time when new recording technologies caused a sudden flowering and cross-pollination of many musical trends. Parlours, Thé-chantants and dansants, recital halls and theatres burst with new ideas. There were no microphones, so ‘classical’ technique was essential. Jazz-style improvisation had yet to come. It’s perhaps unfortunate that the songs produced at the time proved so popular, as it’s the revivals that people associate with it, not the source. If You were the Only Girl in the World brings to mind the Good Old Days and pub singalongs, because nobody listens past the scratches in an old record to hear how it originally sounded.

Our 1910s bands, Ragtime Parlour and the Versatility Serenaders have performed at Orchestral “Lates”, museums and festivals, but always, always the categorisation issue crops up, as does our lack of representation by an agent. Parameters are narrow, and getting narrower, conversely, as music genres splinter and fan outward in new directions that defy classification. We joke that people like the Dolmetsch family were dismissed as cranks, and we see our Edwardian research as a new Period Performance category that just isn’t recognised yet.

I knew a feisty old fellow who had an independent record shop in the nineties, and gleefully put Emma Kirkby’s CDs in “Easy Listening”. People are entirely entitled to their opinions.

But Hell, if Purcell’s Bawdy catches, with titles like As Roger Last Night to Jenny Lay Close or Full Bags, a Brisk Bottle are happily reviewed by the arbiters of taste in the classical world, why not The Rose of No-Man’s Land?

What do I have to do to get a review?