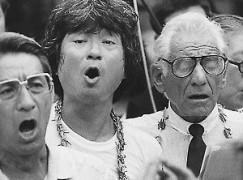 Thirty years ago at the Hiroshima Peace Ceremony, Leonard Bernstein conducted the European Community Youth Orchestra in Beethoven’s Leonore Overture No. 3 and his “Kaddish” Symphony with the Hiroshima Boys Choir, soprano Barbara Hendricks, and Mendy Wager as narrator.

In 1985, Bernstein assembled a “Journey for Peace” tour, which began in Athens, and went to Budapest and Vienna following Hiroshima. Bernstein was a life-long advocate of nuclear disarmament. Following the concert, Bernstein was interviewed live on Good Morning America. He said, “I hope it does some good to grant us the wisdom that war is obsolete and that we should stop all this nonsense once and for all.”

We share with you this photo of Leonard Bernstein and Seiji Ozawa singing Hiroshima Requiem at the Hiroshima Peace Memorial Park on August 6, 1985.