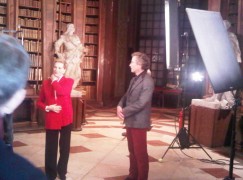 The faltering regime of artistic director Lyndon Terracini has reached for its most desperate gambit yet.

To mark a jubilee production of My Fair Lady in August 2016, Terracini has announced the singing actress Julie Andrews as next season’s limelight director.

Andrews played Liza Doolittle in 1956 on Broadway opposite Rex Harrison. She has enjoyed a rich and productive career as a stage and screen actor. Her experience as a director is confined to a 2003 production of The Boy Friend, and a dramatisation of of her children’s book The Great American Mousical.

It took a genius in Sydney to spot her untapped potential as an opera house director.

That’s what we call creative.

The man who spotted the stolen Stradivarius »