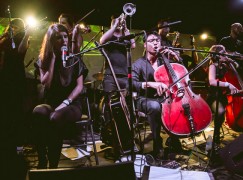 A few days ago Mother Falcon, an Austin-based group that walks the gangplank between après-classical and indie pop, were about to release an album, Good Luck Have Fun, when the big guys stopped it.

Mother Falcon (how do you pronounce that?) got made an offer they could not refuse. The new album will now come out on Universal Music Classics in October.

Mother Falcon’s Matt Puckett says: ‘Good Luck Have Fun explores more deeply the indie-pop as well as the neo-classical sides of our sound. It’s new territory for us both sonically and now in our partnership with UMC.’

Elizabeth Sobol, President & CEO of UMC says: ‘I’ve been following Mother Falcon for quite some time now. Their classically-derived instrumentation and exploratory compositions set them apart. No one sounds like Mother Falcon. Their music is truly in line with the artistic vision of Universal Music Classics.’