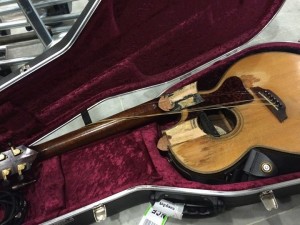 I am not happy with Easyjet after my custom-built guitar was smashed when it was refused space in the overhead lockers and had to go in the hold on a flight to Nice last week. Although I had it safely stowed overhead, and despite my explanations as to why it needed to be there, the cabin crew refused to listen and took it away from me. Inevitably it arrived on the luggage belt in Nice broken into two pieces, despite being in a Hiscox hard case.

As I had to play a gig the next evening I had to rush out of the airport in a panic and find a music shop in the hope of getting it repaired. That proved impossible in the time I had, so I had to buy a new guitar. I didn’t realise that failure to log the damage in the arrivals hall means any attempt to complain afterwards will be met by a complete blank from the Easyjet staff. No one in Nice was prepared to help when I checked in for the return flight, same again when I landed in Bristol.

I queued on the phone to customer services for half an hour earlier today only to be told they couldn’t deal with it, then they gave me another number to call – which turned out to not be in use at weekends. Easyjet – great when everything is going well, appalling if something goes wrong.

The sickening this is, myself and my companion had no other hand luggage and the guitar took up much less room that most couple’s two suitcases. Why this discrimination against musicians? I will never fly Easyjet again and strongly urge other musicians to do the same. A cheap flight is not worth it if it means the destruction of a £2,000 guitar.