Next week marks the 100th anniversary of the birth of Mario del Monaco.

A repository of the great tradition, Mario enjoyed a huge international career after the War in all major houses. Posterity has been less kind to his memory, eclipsing him between the long shadows of Bjorling and Pavarotti.

There is a splendid audio, film and photographic tribute here. Watch this genius interviewer: 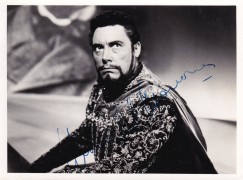