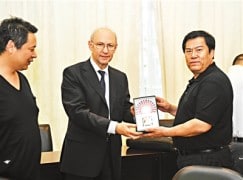 David Whelton has been manager of the Philharmonia Orchestra since before some of its players were born.

Coming from the Arts Council, David was good at maintaining public funding and keeping stakeholders on side. He signed Christoph von Dohnanyi and Esa-Pekka Salonen as music directors and greatly expanded the orchestra’s touring portfolio.

The Philharmonia has been, for much of his time, London’s most refined orchestra – though never its most popular, innovative or transparent. We wish David a happy retirement. He will not be easy to replace. Press release follows.

The Managing Director of the Philharmonia Orchestra, David Whelton, is to retire 29 years after he took up the post. Whelton will leave the Orchestra at the end of its 70th anniversary season, in summer 2016. The process to recruit his successor is underway.

David Whelton has created a programme that sees the Philharmonia Orchestra perform over 160 concerts a year, at its UK residencies – which include London’s Royal Festival Hall, in Bedford, Leicester, Basingstoke and Canterbury, and at the Three Choirs Festival – as well as overseas. His legacy includes the highly successful Théâtre du Châtelet residency in Paris, new music series Music of Today directed by Unsuk Chin, and more recently the critically-acclaimed Salonen series at the Royal Festival Hall. These include City of Light: Paris 1900-1950, its predecessor City of Dreams: Vienna 1900 -1935(2009), Bill Viola’s Tristan und Isolde (2010), Woven Words, a celebration of Witold Lutosławski’s centenary year (2013), and the Richard Strauss 150th Anniversary series, led by Christoph von Dohnányi (2014). Notable major symphonic cycles include Beethoven with Harnoncourt, Brahms and Schumann with Dohnányi, Rachmaninov and Prokofiev with Ashkenazy, and Mahler with Maazel. The Philharmonia’s award-winning digital projects including RE-RITE, Universe of Sound andiOrchestra are bringing the next generation to classical music.

David Whelton said: “My time as Managing Director at the Philharmonia Orchestra has been a great adventure and I will take with me so many wonderful musical memories. It has been a great privilege to work with such an inspirational group of musicians, conductors and soloists and of course an amazing admin team. I take great pride in the indispensable contribution that the Philharmonia Orchestra makes to British musical life.”

Esa-Pekka Salonen, Principal Conductor and Artistic Advisor, commented: “The Philharmonia is an extraordinary orchestra and David has been an extraordinary Manager Director. It has been a pleasure to work with him over the last nearly three decades, and to bring to fruition so many incredible projects, both in the Royal Festival Hall and across the world. He leaves at a time when the reputation of the Philharmonia has never been higher.”

Gideon Robinson, violinist and the Philharmonia Orchestra’s Chairman, said: “David is possibly the longest serving, and certainly one of the most respected, orchestra managers in the world. His contribution to the life and success of the Philharmonia over the last 30 years has been immense and his departure will be keenly felt by the players. We would like to wish him all the very best for the future.”

Michael Hoffman, Chairman of the Philharmonia Trust, commented: “It has been a great pleasure to work with David. His ability to realise the most ambitious artistic plans in London and internationally is legendary. His energy and vision has transformed the fortunes of the Philharmonia and we will be forever in his debt.”

Update: US opera chief is found dead in car »