What future is there for American orchestras?

In the summer issue of Standpoint magazine, I report on the declining fortunes of US orchestras, as experienced at their national convention last month.

The crash of 2008 drove several orchestras out of business and prompted others to resort to the raw capitalist remedy of locking out musicians without wages or health insurance until they accepted lower compensation. In the worst collision, the Minnesota Orchestra starved its musicians for 16 months until local worthies and a loyal conductor, Osmo Vänskä, forced a board retreat and the sacrifice of a meek English president, Michael Henson (the meeker the manager the more presidential his title).

So when the League of American Orchestras (LAO) went into its annual convention in Cleveland this spring it was in subdued and introspective mood, concerned not to rock a listing boat, exercising a flummery of euphemisms by which every problem is a challenge, every steep decline a temporary setback.

As a guest speaker, I was struck by the forced smiles of wilful denial — and even more struck by the absence of musicians. Not one conductor, not one principal player, was invited (or agreed) to address the heads of their industry. Like Britain in the 1970s American orchestras exist in a collective mindset of them and us. 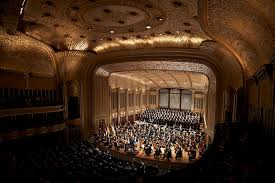 « Millions tune in to the Tchaikovsky Competition