No wonder Bayreuth is so screwed up

Like Christmas on Eastenders, midsummer brings blood and tears to Bayreuth, home of the annual Wagner festival and the composer’s dysfunctional family. Have you been following the opera soap?

Bayreuth is run by two half-sisters, Katharina and Eva, daughters of Wagner’s grandson, Wolfgang. Katie was her daddy’s favourite, Eva was an outcast child of a previous marriage who went to work for a living at Covent Garden and the Met.

For seven years, the sisters have run the festival in relative peace and harmony. Angela Merkel turned up each summer to make sure all was well. But now Katie has told Eva in a lawyer’s letter not to show her face again in Bayreuth.

Eva, who’s seventy, was due to retire in August, so her banishment is bilious even by Wagner standards. Daniel Barenboim, who conducted 20 summers in Bayreuth, calls it ‘inhumane’ and wonders how such a thing is possible in a free and democratic country. Well, there’s nothing free and democratic about Bayreuth. It’s the last absolute monarchy in Europe, a hereditary autocracy answerable to no-one except a board of local yesmen. No wonder the family’s so screwed up.

The trouble stems from the founding father, Richard Wagner. While composing the four-hour unresolved chord of the adulterous Tristan und Isolde, Wagner was having babies with Cosima, daughter of his best friend Franz Liszt and wife of his conductor, Hans von Bülow. That’s the opening episode. Wagner went on to write a four-night Ring cycle in which brothers sleep with sisters and everyone tries to steal the magic ring of power. Opera does not get much messier, or more compulsive.

On Wagner’s death Cosima denied the paternity of one of her daughters and married off her gay son Siegfried to an English orphan, Winifred, who became infatuated with a young visitor called Adolf Hitler. (Still with the plot?) Bayreuth became a citadel of Nazi power; Siegfried’s sons, Wieland and Wolfgang, ran a small concentration camp in the grounds. After the War, the families of Nazi leaders put the festival back on its feet. When Wieland died, Wolfgang banished his children. That’s how the family functions.

How do the Wagners get away with it? Because they are the nearest thing the boringly efficient  Bundesrepublik has to a royal family, not to mention a soap opera. Their antics add mightily to the public levity and give tabloid readers a feeling they know something about art.

As for the art, it’s all downhill. The last memorable Ring cycle was put together for its centenary year in 1976 by two Frenchmen, Patrice Chéreau and Pierre Boulez, sanitised its more odious and racist connotations. Since then, the dreary, provincial Wagners have traded on a distant past with ever diminishing returns. The Lohengrin I saw had men dressed as rats in its chorus, an unintended metaphor.

Vastly subsidised by the state, yet accountable only to a rubber-stamp board, Bayreuth needs to be liberated from its Wagners if it is ever to be viewed as something other than a television saga that has run far too long. But who has the pluck to pull the plug? Who will rid us of these pestiferous Wagners? 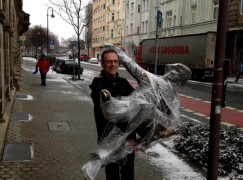 « New York Times awakes to a crime on its doorstep

The composer who’s still under a German state ban »