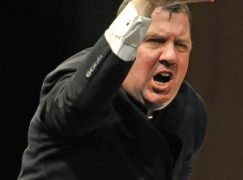 The flourishing Ivor Bolton has signed on as music director of the Basle Symphony Orchestra, starting September 2016. The Swiss will announce it any day now.

Ivor starts as music director of Teatro Real Madrid in September. He will also retain the period-instrument Dresden Festival Orchestra which he co-founded in 2012.

He is presently rehearsing Handel’s Saul at Glyndebourne, in a production by the Komisch Oper’s Australian chief director, Barrie Kosky.

Commencing with the 2016/17 concert season, British conductor Ivor Bolton will take the helm in a four-year contract running till the end of the 2019/20 season. Polish Conductor Michał Nesterowicz has also been named as the orchestra’s new Principal Guest Conductor.

Expressing his excitement over the collaboration, Bolton said: “I am very happy to work with this committed and highly professional ensemble. For a concert to become a memorable experience for both, audience and orchestra, there has to be trust, open-mindedness and passion. All of which I could immediately sense in abundance with the Basel Symphony Orchestra. I am hungry for our shared discoveries in symphonic music, ranging from the classical period up to classical modernism”.

Music that comes up in the sand »