At 95, America’s viola king has died

There were four de Pasquales in the Philadelphia Orchestra. William and Robert de Pasquale were in the violins, Francis was in the cello section.

The big beast was Joseph de Pasquale. Principal viola of the Boston Symphony from 1944, he was seduced home 20 years later by Eugene Ormandy to join his brothers in the Philadelphia and teach future generations at Curtis.

Peter Dobrin as written a lovely account of his life on philly.com, here. 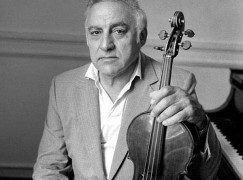