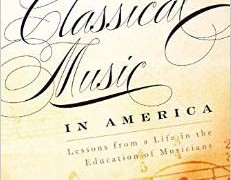 ‘ We are graduating too many, too narrowly trained musicians’

Robert Freeman, former head of Eastman School of Music, has written a book titled The Crisis of Classical Music in America. In a local newspaper interview, he makes some knowing, telling points:

– When you’re in school, you’re hoping to be the principal oboe. Then you get out of school and it turns out there are 500 candidates for the job, 100 of whom are perfectly well qualified.

– We keep increasing the number of music schools and thus annual music graduates. Well over 30,000 a year. Orchestras are going in the other direction. We’re graduating too many, too narrowly trained musicians.

– You can’t make productivity gains in the performing arts. It still takes 85 players to play a Beethoven symphony and you don’t get anywhere trying to play it twice as fast with half as many players. At the same time, the musicians need to be paid more.

– If you’re part of the the society that thinks I’m not much good with words so I play the oboe, you’re digging your own grave. In addition to those, business skills, computer literacy. The kind of thing any leading citizen in the United States needs. If you learn while you’re a student at a music school something about music and how to play your instrument, you also come to the conclusion the world of orchestras is failing and if you’re a part of that you have to be a part of the solution or get into another field.

– In the history of music, before the French Revolution, musicians were generalists. (Then) musicians turned toward specialization — ‘I’m a violist, I don’t play the violin and I certainly don’t play the piano.’ What I’ve been pushing is in the other direction.

‘There are too many mathematician conductors out there’ »