Gustavo Dudamel has committed himself to the Los Angeles Philharmonic for a further three years, taking him to 2022 and sending a clear signal to Berlin (as Yannick Nézet-Seguin has done) that he’s not interested in the once-glittering prize.

Dude has a difficult divorce on his hands and may need to stay put for personal reasons. 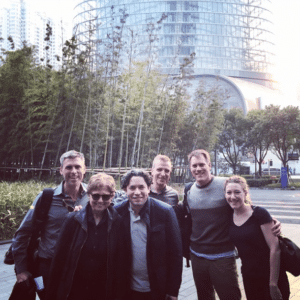 Los Angeles, CA (March 27, 2015) – Los Angeles Philharmonic Association Board Chair Diane B. Paul and President/Chief Executive Officer Deborah Borda today announced a contract extension for Gustavo Dudamel through the 2021/22 season. In recognition of Dudamel’s deepened commitment to the institution, Artistic Director is being added to his current title, making him Music Director & Artistic Director of the Los Angeles Philharmonic, effective immediately.  His original contract as Music Director commenced in the 2009/10 season for a 5-year term and was extended in March 2011 to run through the 2018/19 centennial season. Today’s announcement was made from Tokyo during the orchestra’s first tour of Asia under Dudamel.

Diane Paul commented, “In Gustavo Dudamel, the Los Angeles Philharmonic has a great treasure.  In addition to his dynamic artistic leadership, he continues to expand YOLA, one of the great hallmarks of his tenure, modeled on the inspirational work of Jose Antonio Abreu. On behalf of the Board, it gives me enormous joy to know that we will continue to share the treasure we have in Gustavo with Los Angeles and beyond for at least the next seven years.”

Los Angeles Philharmonic Association President and Chief Executive Officer, David C. Bohnett Presidential Chair Deborah Borda added, “Gustavo’s passionate leadership has instilled a new sense of possibility among our musicians, our audiences, and our community.  His all-embracing vision propels us forward to the LA Phil’s centenary celebration and beyond, and exemplifies the institution’s commitment to innovation and access for all.”

Chairman of the Orchestra Committee Barry Gold stated, “We are absolutely thrilled that he will be our Music Director & Artistic Director through the 2021/22 season. The immediate camaraderie and respect from the beginning between Gustavo and the musicians has continued to grow over our years together, resulting in incredible music making. This is great news for all of us at the LA Phil.”

Dudamel observed, “It has been ten years now since my debut in Los Angeles with the Los Angeles Philharmonic, and my love for both orchestra and city has grown in depth and in intensity over this decade. We have an unparalleled situation in the world of classical music today: great musicians, a strong community base, a healthy organization with amazing administrative leadership, a hugely supportive board, innovative and game-changing educational programs, two iconic venues, and a growing shared history of musical performances. Conducting in the ‘City of Angels’ is a magical experience, and I owe so much to so many Angels and Angelenos.  As I look to the future and how I want to focus my work, it’s become clear that it is about a deepening of commitments to my two musical families – my beloved El Sistema, and this great orchestra, the Los Angeles Philharmonic.”

« US union warns Naxos over streaming