‘I lived in awe of Ronald Stevenson’

The pianist John Humphreys has intimate memories of the great composer and pianist, who died on Saturday. 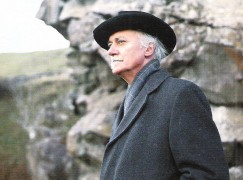 In 1967 I was a piano student in Vienna. One day I dropped by a record shop to see what was ‘new’ on the piano front and an HMV record caught my eye ­ a work by Ronald Stevenson, a composer I had never heard of performed by a pianist I certainly had ­ John Ogdon who, after his shared triumph with Vladimir Ashkenazy at the 1962 Tchaikovsky Competition was at the height of his powers. It was in a spirit of eager anticipation therefore that I forked out however many Austrian schillings it cost in order to listen to a…. ‘Passacaglia on DSCH’ by this evidently very handsome young composer. What I had failed to notice was that I had purchased only record one of a two record set ­ the companion record contained not only the conclusion of the ‘Passacaglia’ but also Tippett’s 1st Sonata and many a dealer had sold the second record in error to anyone requesting a recording of the Tippett. So, frustratingly I never heard the ‘Passacaglia’ complete but what I did hear excited my interest in a way that has rarely been equalled ­ an experience which ranked alongside my first encounter with Bach’s ‘Goldberg’ Variations and Beethoven’s ‘Hammerklavier’. No other recordings were then available of the ‘Passacaglia’ except a privately issued set signed and numbered 1 to­ 100 from South Africa recorded by Stevenson when he was Senior Lecturer in Composition at the University of Cape Town and which had been distributed amongst friends.

The following year I was appointed Assistant Lecturer in Music at Bromsgrove College of Further Education. The Head of Music, Harold Taylor was also Artistic Director of the Bromsgrove Festival, one of the most enterprising festivals in the country and in 1969 it featured Stevenson as composer and pianist. I was delegated with the responsibility of meeting the great man at ‘The Midland Hotel’, Birmingham and driving him to Bromsgrove. I arrived at the hotel full of heady anticipation ­ what would this extraordinary composer of my Vienna LP introduction be like? I found him waiting patiently in the hotel lobby as handsome and engaging as the record photo had promised sporting a wonderful Fedora and with a smile to quieten the most nervous of spirits. I was twenty four and he forty one and I was in awe. Suffice to say that we remained life­long friends and he was largely responsible for initiating my interest in the music and personality of Ferrucio Busoni about who, even at this stage Ronald was an acknowledged authority.

Busoni’s artistic credo informed Ronald’s entire outlook on life and music with much of the ‘transcendental tradition’ as exemplified by Busoni finding its way into Ronald’s own approach to the piano. Ronald was a magnificent pianist with a swash­buckling, Graingeresque technique allied to the most luminous sound and displaying a consummate understanding of the instrument and its possibilities; a performer very much in a direct line to the great composer pianists of the 19th century and as such representing something of an anachronism in the late 20th/21st century when composers seem to have little concept of how to write for the instrument. His generosity, without regard to the clock nor the purse was boundless as fellow composers, students and young pianists who visited him and spent time in his rumbustious company would testify.

The Stevensons had literally an open door at their house in West Linton ­ from street into living room. Little appeared to annoy him but he would cast a cold eye on musical (or any) insincerity, sloppiness or laziness and his own work regime was one of the most extraordinary rigour and discipline.

Our families spent much time together and these occasions were accompanied by considerable jollity, wonderful punning, word play, fine food and drink and with the inevitable reference to Busoni, an eminence grise at every such occasion. Joan and Ronald had a shared interest in both poetry and Mahler and Ronald’s masterly transcription of the Adagio from the 10th Symphony is dedicated to her (in ‘fons et origo’). Too many anecdotes to mention but, plucking from my very deep (non Fedora) hat, a visit to Southwold on the east coast the night before Ronald was to perform at the Aldeburgh Festival and a few of us drank…how shall I put it…’healthily’ in an Adnams pub before staggering to a friend’s caravan, Ronald stumbling around in the dark and losing his precious pipe in the sea but seemingly none the worse for wear the following day….or driving him to London, via my parent’s house near Maidenhead one morning where we stopped for coffee and Ronald regaling us with his astounding pianism on their deplorable upright piano. I never knew him complain about a piano ­ he transcended the instrument’s limitations in a way that few other pianists can.

At the age of sixty-three he had a stroke which might well have signalled the end of his performing career but, exhibiting an astonishing triumph of the will performed the ‘Passacaglia’ with clearly no loss of pianistic prowess. It is difficult in so few words to give an adequate picture of this remarkable man but his questing, Mowgli spirit and total lack of anything which smacked of self­-aggrandisement or personal advancement place him in a category far removed from the meretricious vulgarity which disfigures so much of our music industry today. I offer no analysis of his wonderful music which speaks for itself and has attracted the attention of innumerable fine performers but his songs are as fine as any written and his affectionate and skilful drawing on different world musics as an inspiration for his own creativity gives his own work a special ‘colour’ and feeling.

He has honoured other composers through masterly transcriptions. His seven minute ‘Peter Grimes Fantasy’  encapsulates the essence of the opera in a way that astonished Britten at a private performance in Aldeburgh and as a pianist he introduced me to much obscure repertoire, investing each performance with as much devotion as he would lavish on the finest Mozart, Liszt or Chopin. It would be unthinkable to conclude this reminiscence without reference to Marjorie Stevenson who, over sixty three years of marriage has proved herself the most wonderful, unselfish and supportive of wives. Ronald was unique and his death leaves us all diminished. His like will not be seen again…