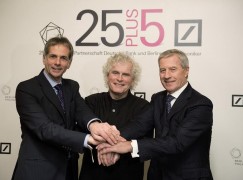 The Deutsche Bank has renewed its munificent sponsorship of the flagship orchestra until 2020, reinvesting in education projects and the Digital Concert Hall. The bank has been a lead partner of the Berlin Philharmonic since just before the world changed, in 1989. No money is specified in the press release (below). This is all about art and social progress. Simon Rattle said: ‘Nice bank, thank you very much’.

another five years and will continue their partnership until 2020.

Jürgen Fitschen, Co-Chief Executive Officer of the Management Board of Deutsche Bank: “We are

thrilled to continue actively supporting this first-rate orchestra in the years ahead. The exclusive and

long-standing bond shared by the orchestra and the bank is unique anywhere in the world. The

combination of discipline, skill and innovative strength make the Berliner Philharmoniker an ideal

Philharmoniker are eagerly looking forward to another five years of partnership with Deutsche Bank.

Together, we have already achieved so much, including our education programme, the establishment of

the Digital Concert Hall and the latest addition, “Vocal Heroes” − the long-term choir programme in

various districts in Berlin. Thanks to the generous support of Deutsche Bank, we will be able to continue

Sir Simon Rattle, Chief Conductor of the Berliner Philharmoniker and Artistic Director of the

Philharmonie Berlin: “Music is not a luxury, but a basic human need. Thanks to Deutsche Bank, we

have been able for many years not only to make this claim, but also to help make it a reality. Without

the bank’s support, our education programme would not have been possible. We owe our thanks to

Deutsche Bank for another five years of support for our ideas!”

Baden-Baden, which was held for the third time. Deutsche Bank has been lending its support to the

Berliner Philharmoniker since 1989. Together, the two partners have initiated and implemented a

2009 and aims to make music more accessible across national and social boundaries: the Digital

Concert Hall. It allows music lovers around the world to view the concerts of the Berliner Philharmoniker

at any time over the internet in superb image and sound quality. Since its launch, more than 550,000

users have registered in the Digital Concert Hall.

education programme, which has introduced more than 37,000 children and young people to classical

music since 2002. Whether through dance, by singing or playing an instrument, every child is given the

opportunity to go on his or her own journey of musical discovery. Since autumn 2013, the “Vocal

Heroes” choir project has formed the focus of the education programme. Venues in three districts in

Berlin have been created for the purpose of bringing people together to sing and make music. The

project is especially designed for children who have not had any exposure to classical music.

As a reliable private patron, Deutsche Bank will accompany and support the Berliner Philharmoniker in

the years ahead as they go on tour through Germany and abroad, and at the opening concert in Berlin

of every new season.

« ‘I lived in awe of Ronald Stevenson’

Opera director: ‘This is a genocide of Russian theatre’ »